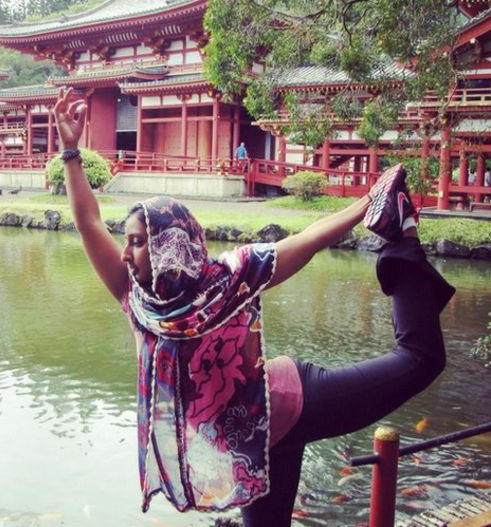 Over the years I’ve come to realize that practicing yoga can be a bit controversial for some groups. Yes, I know for some people that’s a massive understatement and that’s okay. How people observe (or don’t) their faith (or lack thereof) is complicated at best. In the context of my life, yoga and religion is at worst an uncomfortable conversation at the coffeehouse, and most of the time it’s not an issue at all.

As I continue with my teacher training, though, the topic has been on my mind more and more. In a few months, I may be practicing with people whose ideas on how to do yoga may turn out to be very different from mine (presumably those who abstain won’t join in a class). Let me clarify, I live in a very tolerant place with conservative tendencies, so no one is out to burn my yoga mat or anything, but I do get the occasional raised eyebrow.

That odd disapproval is something that at first I found very confusing because yoga for me—though very spiritual—is not a religion, but rather a philosophy that resonates with my values.

So when this article showed up in my inbox, I was incredibly pleased. It touches a bit on different sides of the issue and makes some nice points, so sharing it here seems like a great idea. I think you’ll enjoy it. For your reading pleasure: Does doing yoga make you a Hindu? (Thank you, BBC News.)

Feel free to comment at will and don’t worry, I don’t publish explosions of meanness.

2 thoughts on “Practice or observance?”

© Laura Tamayo and LettersFromTheMat.com, 2016-2022. Unauthorized use and/or duplication of this material without express and written permission from this site’s author and/or owner is strictly prohibited. Excerpts and links may be used, provided that full and clear credit is given to Laura Tamayo and LettersFromTheMat.com with appropriate and specific direction to the original content.